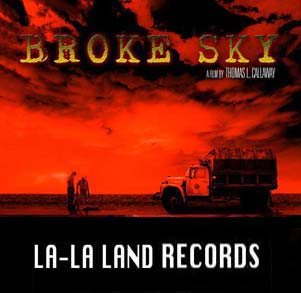 La La Land records is releasing the soundtrack to our feature film Broke Sky. The score to this indie thriller is sparse, evocative and full of surprises like the film itself. This intimate soundtrack of southern noir tells the story of Bucky and Earl, two county workers breaking their backs to keep the highways clean of road kill under the scorching Texas sun. When a carcass-removal call turns up something far more disturbing than a flattened armadillo, best friends are torn apart by a decades-old secret that will have them questioning everything they think they know about each other. As an added bonus, the first 100 customers who purchase the cd directly through our website will receive their booklet autographed by the composers at no extra charge! Quantities are limited. You will be able to purchase these fine soundtracks at www.lalalandrecords.com and other soundtrack specialty online establishments.