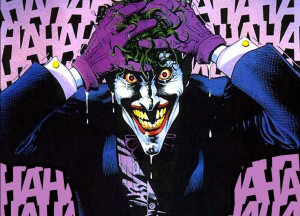 Michael, Kristopher and Lolita are thrilled to share the news that they composed the score to the animated adaptation of “Batman: The Killing Joke,” based on the famous 1998 graphic novel of the same name written by Alan Moore and illustrated by Brian Bolland. Featuring the voice talents of Kevin Conroy (Batman), Mark Hamill (Joker) and Tara Strong (Batgirl/Barbara Gordon), the film is directed by Sam Liu and produced by Bruce Timm.

“Batman: The Killing Joke” provides an origin story for the supervillain the Joker, loosely adapted from the 1951 story arc “The Man Behind the Red Hood!” The shocking and tragic events in the story resulted in major changes to the mainstream Batman continuity. The movie adaptation maintains the dark, psychological and violent tone of the graphic novel, and has become the first animated DC movie to receive an R-rating from the MPAA. Warner Bros. Animation president Sam Register explained, “From the start of production, we encouraged producer Bruce Timm and our team at Warner Bros. Animation to remain faithful to the original story — regardless of the eventual MPAA rating … We felt it was our responsibility to present our core audience — the comics-loving community — with an animated film that authentically represented the tale they know all too well.”

“‘The Killing Joke’ was a ‘Batman: The Animated Series’ family reunion of sorts,” said Kristopher, “Not only did we collaborate with the legendary BTAS producer Bruce Timm and the original voice actors, but we also had the privilege to record with several of the same amazing LA musicians that played on the original scores, recorded by Bobby Fernandez, our original engineer, even using the Neve recording console originally installed at Paramount Stage ‘M’—the stage where most of BTAS was scored!”

Recording “The Killing Joke” at The Bridge Studios, November, 2015