Marvel announced the fourth season of its animated “Avengers” series, now retitled “Avengers: Secret Wars,” at San Diego Comic-Con today. When the Avengers go missing, Black Panther forms the New Avengers to take their place and find out where they have disappeared to and why they disappeared. In addition to Ant-Man and the returning characters from Season Three (including Ms. Marvel, Captain Marvel, and Vision), the new season will feature the debuts of the Wasp and the Jane Foster version of Thor. In an interesting crossover from the feature films, actor Hayley Atwell will reprise her role as Agent Peggy Carter from the Marvel Cinematic Universe in an episode that will see Carter teaming up with Captain America and Iron Man to stop Kang the Conqueror. Michael, Lolita and Kristopher are thrilled to continue composing the score for these epic stories.

Read more about the release from Marvel’s official announcement on their website. 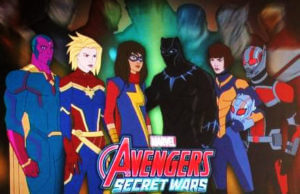