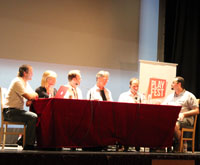 Today, there was a special event that DMP was fortunate to be able to participate in. The festival wanted to honor the legacy and memory of Shirley Walker and they asked Michael, Kristopher, and Lolita to help out. Also on hand was Shirley’s son Colin who had flown over with his family for the festival.  Larry Rench, one of Shirley’s primary orchestrators for many years and a part of our traveling group was also on stage to share stories and memories of her. It was an emotional hour and half filled with both tears and laughter as everyone talked about the amazing influence that Shirley had had on their lives and on their careers. It was an appropriate and meaningful tribute and it proved beyond a shadow of a doubt that the reach and influence of her musical legacy continues to live on even after her untimely passing.