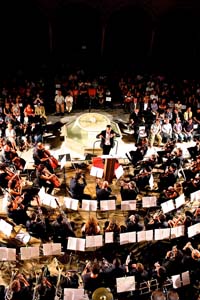 The day of the final concert finally arrived. Nervous energy was plentiful for all as we headed to the venue for the marathon morning rehearsal and sound check. Soon after the first few pieces were played by the orchestra, we all breathed a collective sigh of relief. They sounded really good. The composers all felt that their music was in good hands. Lolita managed to sneak a short rehearsal with the choir in a side room to go over the extensive lyrics that were part of her piece. They were a great group of singers with much enthusiasm and spirt. They even swarmed Michael, Lolita, and Kris asking for autographs afterwards. The weather that evening was as ideal as could have been hoped for. A warm breeze blew through the plaza and the sounds of the concert were carried through the city streets. It was a full house and at the end of the concert the audience leapt to their feet and demanded an encore. In a surprise move, the conductor choose DMP’s “Ben10 Suite” as the encore selection. The after party went on until daybreak in the hotel courtyard. The next afternoon, there was a closing banquet that included all of the participants and organizers. It was the longest banquet table I think I’ve ever seen. As we each headed out of town that day, there was a genuine happiness in our hearts and great hope to return one day to the streets of Ubeda.