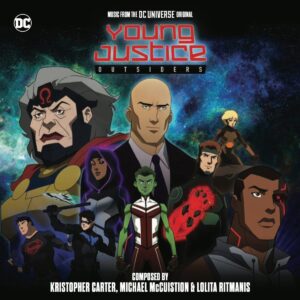 The official soundtrack from the third season of the hit Warner Bros. series “Young Justice” has been released by La-La Land Records. This limited-edition 2-CD set features nearly 2.5 hours of original music created for this season alone! Mastered by James Nelson/Digital Outland, the package includes a beautiful booklet designed by Dan Goldwasser with insightful liner notes by John Takis. A limited number of discs were signed by the composers for the soundtrack’s launch. Thanks LaLaLand!